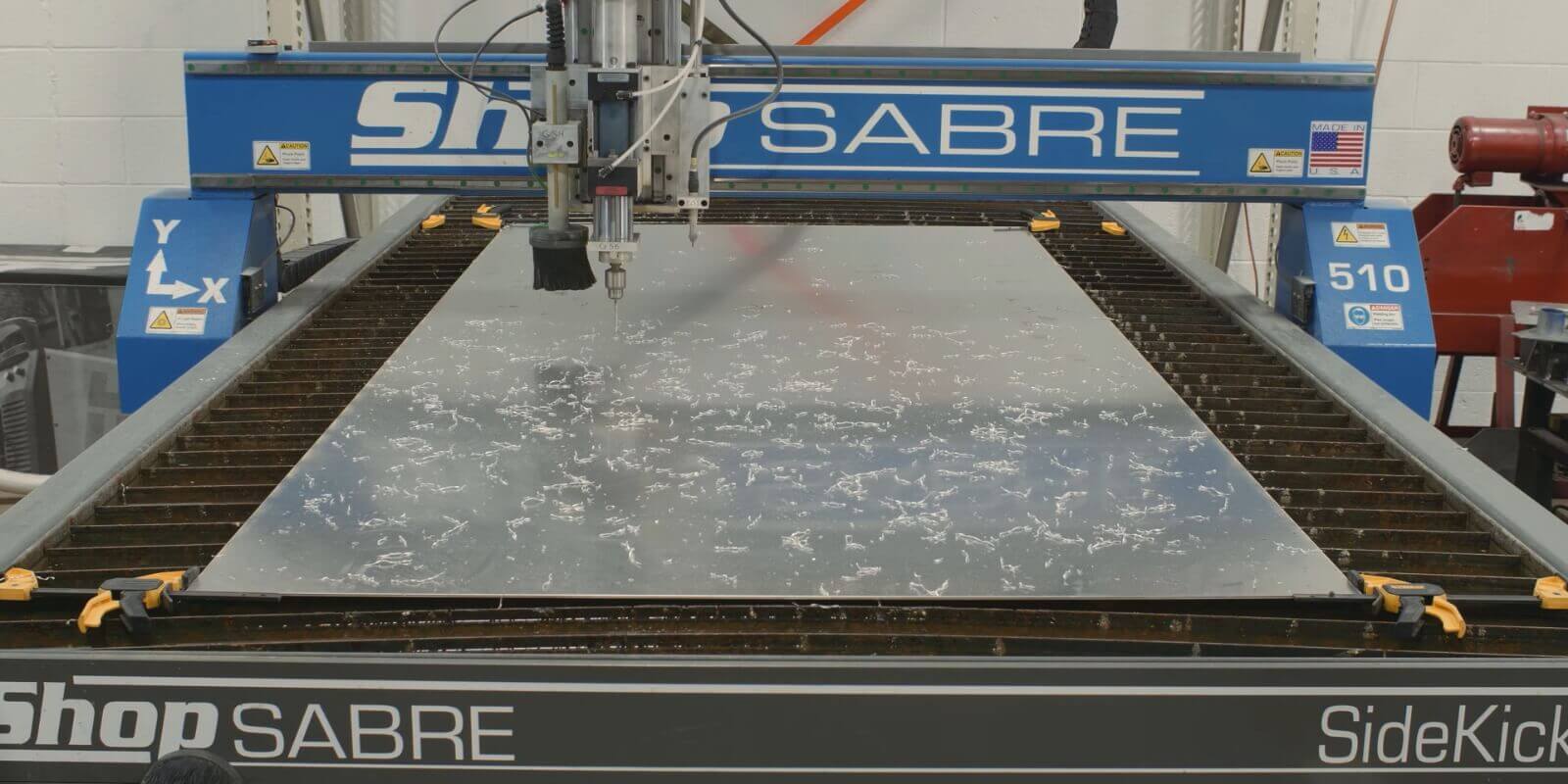 The versatility and customization of ShopSabre’s CNC machines are among their greatest advantages, as we are able to tailor our offering to meet the unique needs of shops across many different industries and applications.

For Prime Manufacturers in Minneapolis, MN, this capability enabled in-house machining of a number of complex parts for co-owners Adam Hagen and Russ Strahota.

Here is a closer look at Prime Manufacturers’ experience researching, purchasing, and implementing CNC technology into their shop.

Assessing the need for in-house CNC

Several years ago, Prime Manufacturers was producing a polycarbonate part for the marine industry that required CNC machining on a router. Since Prime didn’t have a router, they began outsourcing the part.

As production grew over the next couple years, lead times also grew and began preventing Adam and Russ from keeping up and from keeping their OEMs in supply. They also manufactured numerous different versions of the product, and every time they had to make a prototype, it became very cost-prohibitive. They knew it was time to invest in a CNC router for the shop.

Once they decided to bring the router work in-house, they then began shopping and researching a number of companies.

Adam and Russ had a number of requirements for their CNC router:

In their research, Adam and Russ found that most machines featuring ball screw technology and closed-loop AC servos fell within the $100,000-$200,000 range – until they found ShopSabre, the only machine in their desired size category that had everything they needed.

Getting up and running

After purchasing their ShopSabre CNC router, the most immediate concern became, “Are we going to be able to run this machine?” Neither Adam nor Russ were machine operators by trade, so they were a bit skeptical of the learning curve. However, once the machine showed up, they found it easy to use and were up and running within 24 hours.

“It was surprisingly easy and very intuitive on the user interface end. It did exactly what we needed.”

Eventually, Adam and Russ had another product in need of aluminum cutting. They were initially performing the work on their CNC router, but soon began hitting the capacity of how much they could produce on just one machine. They decided to outsource that work to a laser company, which was expensive and also led to increased lead times. They knew they needed a way to bring this production back in-house.

They looked at options for producing these parts themselves, but laser was too cost-prohibitive and other heavy machinery like punch presses also proved to be non-viable options. Adam and Russ kept coming back to the question of whether or not they could produce this part with a CNC plasma – but there were some issues there, as well.

The production required the drilling of many small, 1/8” holes, which was a challenge for the CNC plasma and was also too much work to do by hand in post-process. They started thinking of ways to put a drill head on the plasma, but most plasma gantries are not designed very strongly due to the typical lack of cut force on the machines.

However, ShopSabre had recently come out with the new design for its SideKick CNC plasma.

“They already had a reputation in the industry for making really great plasmas, and their new gantry design allowed us to put a drill head on.”

The duo contact ShopSabre to see if they could help create a solution, which ended up being a drill head mounted on the plasma with its heavy-duty steel gantry. Now, Adam and Russ could both drill holes and cut with the same machine.

“This machine was the solution for us and it’s met every expectation we’ve had. It’s performed flawlessly and really brought our company to the next level.”

ShopSabre manufactures world-leading CNC routers and CNC plasmas to provide educators, hobbyists, and shop owners alike with unmatched precision, efficiency, and versatility. Whatever your goals may be, we are dedicated to helping advance the future of CNC.

Shop our unmatched collection of CNC routers and CNC plasmas in Minneapolis today to experience CNC the way it was meant to be.